Netflix has been busy acquiring movies from different countries for its global audience. Luckily, Korean movies are now available on Netflix with English dubbing and subtitles.

This is great news for fans of Korean cinema, as they can watch their favorite movies from the comfort of their homes!

That said, there are a lot of great Korean movies on Netflix. Of course, there’s always something for everyone, from action and thrillers to romance and comedy.

But since, Netflix has gradually expanded its Korean selection. As a result, it has a pretty good lineup of both new and classic films from South Korea.

Whether you’re a fan of Korean cinema and looking for something lighthearted, there’s sure to be something on this list that will appeal to you.

So without further ado, here are the best Korean movies on Netflix right now!

The Host is a South Korean monster film by Bong Joon-ho. It tells the story of a dysfunctional family who lives in Seoul and their efforts to rescue their daughter from a giant monster. The creature emerges from the Han River and starts terrorizing the city.

The film was also a major critical and commercial success, becoming the highest-grossing South Korean film of all time.

It also screened in the Un Certain Regard section at the 2006 Cannes Film Festival. Here, Bong won the Best Director Award for her film.

The Korean thriller I Saw the Devil is a dark, twisted, and intense film that will leave you on the edge of your seat. Its story revolves around a serial killer murdering women and a police detective determined to track him down.

Directed by Kim Jee-Woon, starring Choi Min-Sik and Lee Byung-hun, this film has excellent acting and a suspenseful plot.

Hence, the police detective tracks down murdering the killer, realizing that he became like the man he hates.

Read More: How to Watch Japanese Netflix in Canada

Hence, the plot sets in a future where an Ice Age kills off all life on Earth after a failed experiment to stop global warming.

After expanding its movie catalog with many Korean movies, Netflix also added the drama blockbuster, Assassination.

The film tells the story of a team of South Korean assassins sent to kill a Japanese politician in Tokyo. Yet, things go awry, and the team must fight their way out of the city alive.

If you’re looking for a fun and lighthearted movie to watch, Seoul Searching is an absolute option. It’s a coming-of-age story about a group of second-generation Korean teenagers. They traveled to Seoul to attend a summer camp in 1986.

The cast is also multicultural, making the film all the more interesting. In addition, the movie’s been praised for its humor, exploration of Korean culture, and accurate portrayal of the 1980s.

So if you love Korean culture or coming-of-age comedies, this is definitely worth a watch!

The Wailing is a South Korean mystery-horror film by Hong-jin Na. The thriller also stars an ensemble cast of Kwak Do-won, Hwang Jung-min, and Kim Hae-Seong.

It tells the story of a policeman investigating a series of murders and supernatural events in a village in Gyeonggi Province.

A Japanese man claiming to be a priest arrives in the village during the movie. Later on, he performs rituals that make the villagers possessed by evil spirits.

Hence, the film premiered at the Cannes Film Festival on May 16, 2016, awarded as the Best Director.

The Age of Shadows is a South Korean period action film by Kim Jee-Woon. It stars Song Kang-ho, Gong Yoo, and Han Ji-min and is set in the 1920s about the Korean resistance against the Japanese occupation. It is also a well-done, action-packed movie with great performances by the cast.

Moreover, providing a well-rounded all-inclusive view on both sides of the occupation is what’s more absorbing.

The film also received critical acclaim, winning numerous awards, and was nominated for an Oscar for Best Foreign Language film.

Netflix released a movie called The Bros, which became a sensation in the 2000s. The story is about two estranged brothers brought back together by a family tragedy.

But they must then come to terms with their broken past to reunite with one another.

The movie received rave reviews from critics, making it a box office success in Korea and worldwide.

The audiences also loved the heartwarming story and strong performances from the cast. So if you’re looking for a great movie this weekend, it’s worth watching!

The film revolves around a man who discovers he can travel through his dreams to solve the mystery of his missing child.

The main character in the film goes through a lot of pain and grief. But after learning how to lucid dream, he can track down his son and gain closure.

The film had its world premiere at the 74th Venice International Film Festival on September 2, 2017. 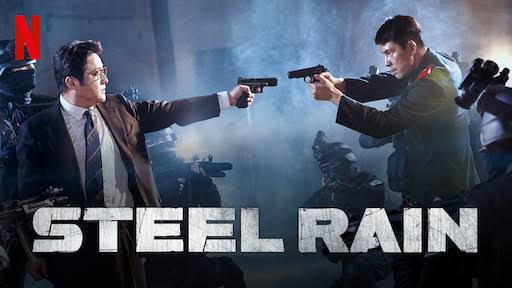 Another of Netflix’s latest and popular films is Steel Rain, a Korean movie that has been receiving rave reviews.

The plot sets in a future world where South Korea is on the brink of war with the North. On that account, the acting is superb, and the plot is also thrilling and unpredictable.

A North Korean agent (Jung Woo-sung) goes undercover in South Korea to carry out a mission.

But he later finds himself embroiled in a conspiracy threatening the entire peninsula. Hence, a gripping, fast-paced action thriller set against the backdrop of global politics.

The story is about a young girl trying to save her best friend, a giant creature called Okja. A large corporation takes the creature that wants to use her for its purposes.

Hence, the movie has received mixed reviews. But it’s not your average Hollywood movie, only more of a slow-paced, character-driven film.

Psychokinesis is a mind-bending South Korean thriller following up after the works of Sang Ho-Yeon in ‘Train to Busan.’

The film sets in Seoul following the story of a bank security guard who gains psychokinetic power, using it to save his daughter.

A science fiction that came out as a blockbuster hit in Korea! The critics and the audiences also praised the film for its storyline and mind-blowing special effects.

So if you’re looking for a good Korean fantasy film, Psychokinesis is worth adding to your watchlist!

The Drug King is a South Korean biographical crime film by Woo-sung Jung and starring Song Kang-ho. It tells the story of Lee Je-hoon, a small-time dealer becoming the country’s drug kingpin in the 1980s.

The Drug King is also a great film to watch if you’re interested in Korean culture or crime dramas.

On top of that, it is a well-made excellent movie to learn more about the Korean drug trade in the 1970s.

Hence, it also provides a fascinating historical context with a glimpse into the inner workings of the Korean underworld.

Netflix is making great strides in its original content, and there’s another Korean movie to its lineup called Jo Pil-Ho: The Dawning Rage.

The film is by Jeong-beom Lee, known for his slow and methodical directing style, and featuring Song Boo-gun, Park Hae-Joon, and Philip Hersh.

This movie revolves around a prosecutor pushed to the edge and becomes a vigilante. The acting in this movie is superb, and the plot is also very well done. Moreover, the action scenes are also realistically done, keeping you on the edge of your seat throughout.

Alive is a South Korean zombie film that tells the story of a survivor stuck in his apartment during a zombie outbreak. Now, he must use his skills and knowledge to survive while also trying to escape.

The movie’s a talented project of Il Cho and features a star-studded cast of Yoo Ah-in, Park Shin-Hye, and Jeon Bae-soo.

Moreover, the critics also acclaimed the movie for its excellent acting, tight plot, and its suspenseful take on the zombie genre.

Night in Paradise is a Korean movie that is sure to keep you on the edge of your seat. The movie is about a duo hiding out on an Island who gets caught up in a murder mystery. Hence, the film is well-made and features excellent acting from the cast.

The movie explores the different aspects of their relationship as they experience different events and challenges. Moreover, the plot sequence in the movie is also top-notch, keeping you guessing until the very end. If you’re looking for a good thriller to watch, Night in Paradise is worth watching!

Netflix has been on a roll lately with its original content. One of their latest additions is the Korean movie Space Sweepers. Set in 2092, the movie follows a space junk ship “The Victory” on a mission to prevent Earth from mass destruction.

Sung-hee Jo directs the movie; the movie is a great mix of comedy and action. It’s also rare to find a movie that keeps you entertained from the start, but Space Sweepers does that.

Hence, the ship faces many challenges on its way, making it a fantastic movie for those who enjoy science fiction.